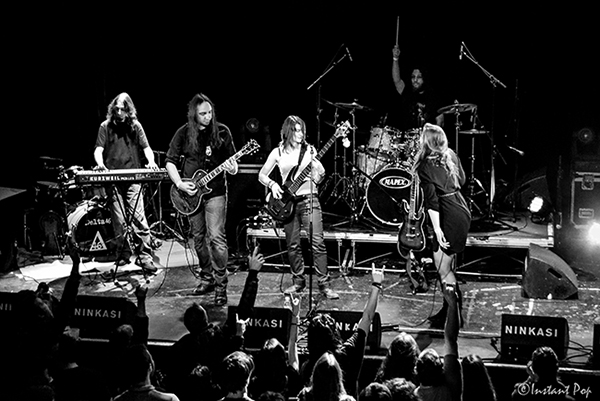 TALVIENKELI is a progressive symphonic metal band which takes its roots in France, near Lyon. With seven members (co-singers Camille Borrelly and Sandre Corneloup, Pierre Besançon and Camille Vadin on guitar, Laëtitia Bertrand on basse, Pierre Cordier on keyboards and Paul Sordet on drums), the band records its first autoproduced EP « Blooming » in 2014. Shortly after that, Sandre Corneloup and Camille Vadin decides to leave the band.

In 2016, TALVIENKELI signs a contract with the label WormHoleDeath and launches the production of its first album, « Hybris », which is released in 2017 in Europe, in the U.S.A and in Japan.

In 2019, after Camille Borrelly, Pierre Cordier and Paul Sordet's departure, the band welcomes the singer Maïté Merlin, the guitarist Thibault Chevalier, Florent Dumortier on drums et Geoffrey Turpin on orchestrations. The band is working on it's second album. 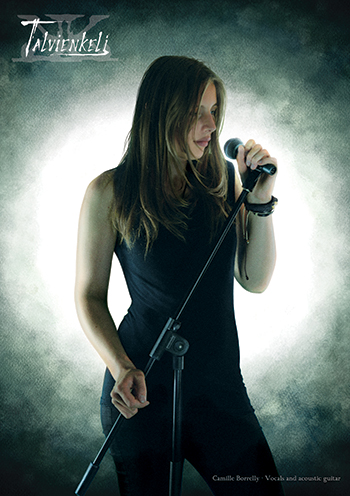 «I started music when I was 17 by learning how to play accoustic guitar. I then entered the conservatoire of Mâcon a year later willing to achieve more projects in music. I have been studying classical guitar and musical theory there for 5 years. At that time, I was mainly inspired by film music (Joe Hisaishi, Howard Shore, Hans Zimmer, James Horner, James Newton Howard, John Williams …) and rock music (Led Zepplin, Scorpions, The Who, AC/DC …). In 2013, I entered the classical singing class of Mâcon by dint of training on the songs of my favourite bands of metal : Nightwish, Epica, Scorpions, Rhapsody of Fire, Stratovarius, Sonata Arctica… Since September 2016, I study at the ENM (National School of Music) of Villeurbanne where I also get acquainted with film music composition.»

«I entered the music sphere when I was 16 as I acquired my first instrument : a guitar. Very soon I started composing music, tracking the influence of bands like System Of A Down, Seether … in a very Nu Metal genre. Genre which will evolve under the influence I then took from other bands I discovered : Children Of Bodom, Epica, After Forever … that will progressively make me shift to Symphonic Metal. But it's only with my late discover of Nightwish and Therion that I will found my style of predilection. I thus needed keyboards for my new musical compositions. So I decided to give up the guitar on 2011 to devote to this instrument.» 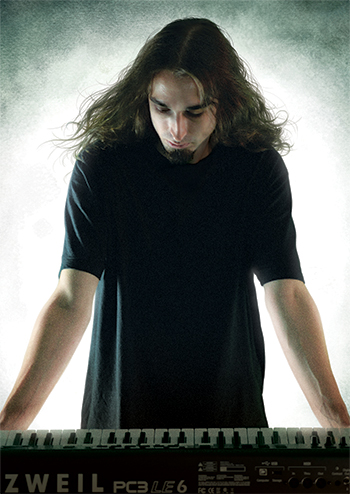 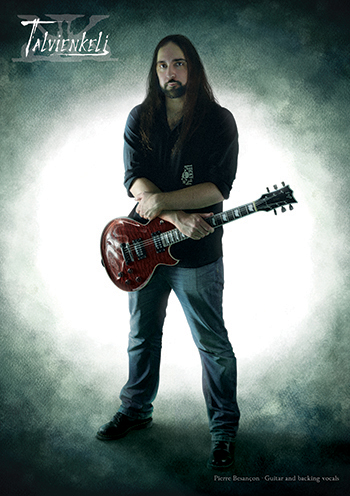 «In my very early days, I was cradled by the Eighties Rock music. But it's in 2005 that I discovered my style of predilection by listening to the album « Once » of Nightwish. I then went in search of new bands of all style such as Epica, Kamelot, Five Finger Death Punch, Arch Ennemy or even … Katzenjammer ! I am still inspired by the sound of keyboards from the eighties or nineties which I use in a project I work on in parralel of Talvienkeli. About instrumental practice, I started playing drums at first and took some lessons in the district where I live. Feeling that these lessons wouldn't be enough for me, I started learning how to play electric guitar by myself. Since 2007, I didn't give up on improving my skills on this instrument. Moreover, learning how to play drums brought me a well-established sense of rhythm.»

I currently use two ESP-LTD guitars and Seymour Duncan microphones.

«I starting teaching myself how to play bass when I was 16, out of curiosity and willing to play on the music of bands I used to listen to (Nightwish, 30 Seconds To Mars, Dire Strait, Pink Floyd). But that's only 2 years later that I started working on my technique by entering the ranks of Talvienkeli and Pharnal (a French progressive metal band). Ever since I try to widen my approach to the bass. I thus explore the instrument through its different tone ranges (playing on basses with 4 to 8 strings) or its different sensibilities (fretless, double bass), trying to add a touch of originality in the way I play.»

Bass with frets : Musicman Bongo 6HH with Warwick strings; A fretless one : Ibanez GWB 35 with Addario Tapewound strings (nylon-coated). I advocate the EBS brand to sonorize one bass. I myself use an EBS Reidmar 250 lead head and an EBS Classic Line 410 speaker. 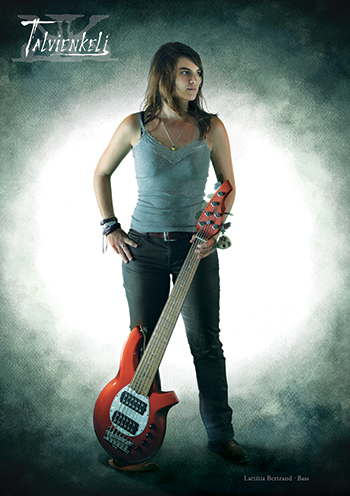 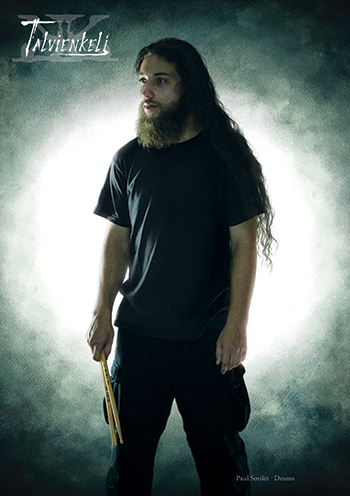 «I started playing drums when I was 11. I took lessons from a friend of my brother (Jérémie Pannetier) which then pushed me to enter the conservatoire of Mâcon. I am currently a student in musicology. I worked on my intrumental performance with the bands Stoechium (Death metal, France) and Burning Flesh (Brutal/Black Death Metal, Switzerland).»

The powerful and deep sound of TAMA drums, the accuracy of PAISTE cymbals, and the lightness of AXIS pedals suit me.